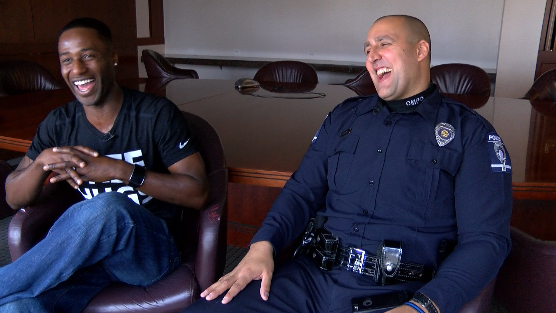 The night of September 22, 2016 will likely go down in Charlotte’s history as one of the darkest.

Uptown streets were crowded with thousands of protesters, explosions shook the air and anger was thick in the hearts of hundreds reacting to the shooting of Keith Lamont Scott the night before.

It wasn’t the kind of scene that seemed in any way appropriate for hugging, but Ken Nwadike Jr. put on his “Free Hugs” t-shirt and confronted the crowds anyway.

“I think it was the first time people saw me exchange that kind of heated dialogue right there on the front lines, before that they would just see my hug videos and ask what good does it do when he shows up anyway,” Nwadike said.

Nwadike has claimed national attention as the “Free Hugs Guy”.

He started making videos of himself hugging strangers and those videos went viral.

Nwadike then found himself very useful during protests following recent police shootings across the country.

On that Thursday night in Charlotte, as chaos shook the city, Nwadike was on the front lines trying desperately to keep the peace by engaging in dialogue with both police and protesters.

Stores had been looted, windows smashed, angry mobs of people were throwing M-80 firecrackers into the air, and Nwadike heard an officer call out to him.

“He said hey, how about one of those free hugs?” Nwadike said.

The officer, 6 feet 9 inches and 300 pound Chris Frunzi, was decked out in full riot gear and had just accepted Nwadike’s invitation that was printed on his shirt, “Free Hugs”.

“I was tired and dehydrated and my skin was burning from all the tear gas and I saw his shirt and said ‘I know that guy,” Frunzi said.

“He looked at me kind of puzzled kind of like, ‘Seriously now? You’re in full riot gear,” Frunzi said.

But Nwadike approached the officer and what happened after that has been shared on the internet hundreds of millions of times.

You could call it, “the hug heard round the world”.

The two men embraced and right there in the middle of the chaos, a spark of humanity caught fire.

The image put both men in the national spotlight as a beacon of peace during a tumultuous time.

Wednesday morning, Nwadike flew back to Charlotte from his home in Los Angeles and met with Frunzi for the first time since the iconic photo.

They talked for hours about the photo and about life.

They shared their views on finding common ground in a world of division.

They sealed the bonds of a friendship that began with nothing more than a simple hug.

Ken E. Nwadike, Jr. is an American documentary filmmaker, motivational speaker, and peace activist popularly known as the Free Hugs Guy online. Nwadike Jr is the founder of the Free Hugs Project, which produces motivational videos to spread love, inspire change, and raise awareness of social issues. His 'Free Hugs' videos have reached hundreds of millions of views on Facebook and YouTube. In 2014, Nwadike launched the Free Hugs Project to spread love in response to the bombing of the Boston Marathon. The Free Hugs Project gained popularity in 2016, as Nwadike made major news headlines for his peace-keeping efforts and de-escalating violence during protests, riots, and political rallies. Nwadike was featured in Google's 2016 Year in Search video as a highlight of some of the year's most defining moments. Nwadike has made many appearances on news programs and radio broadcasts worldwide, including CNN, USA Today, Good Morning Britain, and BBC News.